Testing the Linux-Lite 6.2 release candidate today. First thing of course, will be to dump the stupid default browser (Google Chrome) for an old favorite (Brave, for now). Then my usual desktop customizing and off to the races.

Ubuntu-based, but snapd is disabled, thankfully, as they are in Linux Mint and some other Ubuntu derivatives. Lite Tweaks is a favorite feature of mine on this lightweight, beginner-friendly Linux distro. Point-and-click simplicity to maintain, clean, and update the OS.

It’s a little bit buggy right now, probably not for those who want a ready-out-of-the-box experience. The bottom panel disappeared when I installed my alternate browser and changed the panel to reflect the replacement browser. Once restored, it got to blinking on and off between a black background and my custom choice (transparent). A reboot fixed it. A little bit weird, but theme changes in almost every distro have their little temporary quirks. It’s FAST though! Very responsive, even on my modest li’l ‘puter.

IF YOU WANT FIREFOX, DO NOT INSTALL IT USING LITE SOFTWARE unless you’re okay with snap packaging (the default in Ubuntu, disabled in Linux Lite). Use the Mozilla PPA instead. This warning is visible in Lite Software if you select Firefox from Lite Software. But if you dislike or are the least bit hesitant about snapd, you have other options, external to Linux Lite.

Other than those minor blips, Linux Lite 6.2 (RC1) runs nimbly and quick. Added Z-RAM (from Lite Tweaks) and Preload to speed things up even more. After their first runs, apps load and run at surprising speed for such an old box.

On my recommendation, the Confederate Space Force has officially adopted Linux for use in all of our starships, satellites, and ground support.

Whether for military use or otherwise, Linux beats the living hell out of the major alternative operating systems available.

If you have thought about enlisting in the Confederate Space Force but have assumed that the technology must be beyond your ability or comfort level as an “ordinary user” of computers, rest assured: Linux makes it easy on even the most technophobic among us (including myself).

…to Lieutenant Commander in the Confederate Space Force! My first command was on our latest away mission while the Captain was assigned to a spy mission where he was able to document this alien life form working for the Democratic Party:

In an art museum, this well-disguised life form was trying to interpret symbols on a fire suppression access panel. Obviously an alien, ignoring the existing cultural wealth of the museum in order to undermine the safety of visitors.

In the meantime I was tasked with conducting battle drills on the CSS General Lee (pictured below). Not so much to sharpen the crew’s fine skills as to familiarize me with my new ship and the protocol I am expected to follow as First Officer (still a sidekick, dontchya know).

It’s a great honor and a great challenge! More later as things develop and as public release allows.

I should claim disability for my techno-phobia or something. It’s paralyzing at times.

Reasons to be Scared of Everything Tech:

The only way to completely eliminate or mitigate exposure to all these terrors is to just unplug altogether, get off the Internet, lose the cellphone and laptop, abandon anything connectable to a server, and live off the grid. Most of us can’t do that and don’t even want to. We may end up doing that anyway if the “new world order” our leaders are pushing for succeeds. But in the meantime, I prefer to keep my devices that I rely on for paying my bills and living my middle-class life in rural America.

Reasons to Stop Being Scared of Everything Tech:

My fear of all these terrors in computing has sent me some wild goose chases along the way, changing operating systems and software to avoid them, and ending up with a computer I can’t even use comfortably, yet still free of unnecessary bloatware* and other stuff I don’t want or need. Even my Xfce-supplemented antiX mixture has extra window managers and menus and special needs (like choosing certain repositories and rejecting others for specific software installation and when updating). It’s unnecessarily complicated and cumbersome without the compatibility of most software that depends on stuff like the dreaded systemd or elogind packages.

What principles can I stick with and what priority should they have when choosing an operating system and software?

To meet these criteria, I really should rule out “politicized” Linux distros like antiX, even though “de-politicizing” antiX is as easy as removing bookmarks from Firefox. It “de-policizes” only my copy of antiX, but I can’t advocate for the OS I’m using! Kinda hypocritical, and I’m supposed to be a man of principle above all.

Then there’s Firefox, which has “gone woke” besides the other big issues it’s having. Firefox is out. So is Google Chrome, because Google is friggin’ evil and I won’t have anything to do with it. I’m still a Seamonkey fanboy even though it’s based on Mozilla and hosted there for the time being, because it is no longer a Mozilla product. It’s independent and therefore non-political. Same for Brave Browser: Based on Chromium (which is FOSS) but not a Google-affiliated descendant of evil geniuses trying to spy on everyone and steal their data.

To stay true to my principles, yet without crippling or severely encumbering my user experience, I could return to an old favorite, Xubuntu-based Linux Lite (which has snaps disabled, thank you very much) and dump that evil default browser and replace it using a PPA.

I had no idea, no symptoms, really. But I’ve had cancer, apparently, for several months! Three biopsies and one surgery later, they think they got it all and I can avoid chemo-therapy and all that other stuff.

To be honest, I think I would have refused chemo anyway. It’s worse than the disease, from all I’ve heard about it. Not that I’d mind losing my hair and all that, but being sick all the time? The weakness, the nausea, no freakin’ way. Too much suffering just to buy a couple of extra years for a guy who has already enjoyed a full and satisfying life.

Death does not frighten me. Getting there – the process of dying scares me a bit just because I don’t like pain. And I would prefer to die in battle, taking a lefty commie sonofabitch out with me as I leave this world. Must be some Klingon blood in me or something, but that’s how I feel. I do not want to die weakened, helpless, and lingering in pain. I fear indignity more than death.

So if the cancer comes back, take me to the front lines and give me the death I desire. A warrior’s death!

Top of the Charts!

It feels like for.ev.er since Slackware updated to 15 from 14.2, and even lonnnnnger since it’s awesome Xfce derivative was updated. But I’m pleased to announce that “Linux for Lazy Slackers” has released Release Candidate 1 of SalixOS 15.0! Read the announcement here. It is available in both 64-bit and 32-bit ISOs, both systemd-free, lightweight, and they work with the usual mind-bending speed users have come to expect.

Sourcery is gone, but hopefully not forever. In the meantime there’s the wicked-kewl slapt-src tool, but it’ll probably rarely be needed now that SalixOS offers flatpaks. 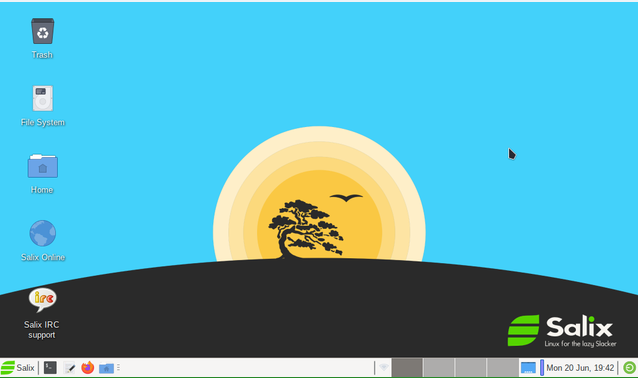 Screenshots courtesy of “Gaucho.” There is a cool dark theme called “Dracula” and some different light and dark themes to choose from.

It’s Xfce, so infinitely configurable of course, and easily so. The top photo is the “Full” version as it appears on first boot.

One of the testers, who apparently would rather use Ubuntu, Zorin, Elementary, or Mint to read her posts, has suggested all kindsa add-ons and features that the big one-size-fits-all distros use. The backlash against that is nearly universal, thankfully. Add all the bling you want in a few clicks, for cry’n out loud, but the Keep It Simple mantra, and the one-application-per-task philosophy that has served Slackware and SalixOS so well for so long remains popular with the niche of users Salix is aiming for: Lazy Slackers. But not irresponsible ones who are loath to open a terminal window for any reason.

Development has been deliberately slow and steady, both for the usual quality of getting things right early and for a shortage of testers. But “Gapan,” the project lead, has devoted countless hours to it. He’s in the forums frequently and takes suggestions happily and speedily. Needed changes find their way to the repos often the same day they are requested or suggested in the forums, and instructions posted.

Whoever the heck over at Distrowatch ever suggested that this project is “dormant” needs to repent in dust and ashes, say three Hail Gapans and at least three Our Salixes as penance for such blasphemy!

Finally, here is 15.0RC1! I know it took a lot of time, but we’re very close to the final release now. With any luck, there will be no show-stopping bugs with this and we can release it in a few days as final.

A lot of work has been done in the repos since the beta. We now host almost everything that exists in SBo as binary packages! There is still a little bit of work do be done, but we now have several thousands of packages ready for installation. Our repositories for 15.0 alone are bigger than all previous Salix releases combined! Add to that the ability to install software through flatpak and there will be no shortage of software for 15.0!

Few other things have changes since the beta, one that is immediately obvious after installation is that the traditional applications menu has now been replaced by whiskermenu. Lots of other fixes here and there, the default GTK theme is now “Salix” and the default icon theme, Qogir, has received several fixes.

If you’re updating from a beta installation and you don’t want to reinstall, make sure you run something like this:

There won’t be any breaking changes like this from now on.

Please install and report anything that comes up!

(64bit iso has been uploaded already, 32bit iso being uploaded as I’m posting, should be ready in ~15 mins)