One of the things I really take joy in doing is restoring old throw-away and hand-me-down computers and making them run better than new, using lightweight Linux operating systems and free software. I can then donate them to a local school, church, or other charity. Mostly desktops, because laptops are harder to do because of the wifi tweaking I have to do. I prefer the Xfce desktop because it’s so very intuitive, even people who never used a computer before can just point-and-click their way along with an easy learning curve.

By the way, I got in trouble at school for my silly answer to the professor’s question, “What was the first point-and-click interface?”
My answer: “Colt Firearms.”

Where was I? Oh yeah – old hardware. I may have to quit when 32-bit Linux systems become impossible to find. It may not be long, but while it lasts I’ll keep that ancient, one-step-up-from-an-abacus Windows98 machine running along for as long as I can.

Here’s one I won’t ever donate: 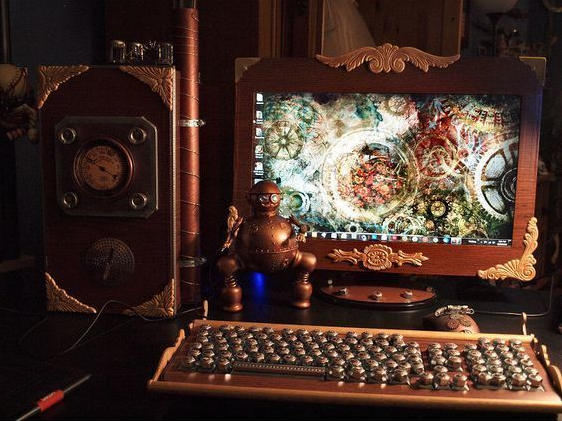 The dial is a thermometer. The gauge doesn’t show degrees, but whatever. The speaker is covered by a collander-type slotted spoon.

3 thoughts on “Linux on Old Computers”